The outstanding question in the field of cardiomyopathy research is how single amino acid mutations in several sarcomere proteins leads to similar phenotypic changes in heart morphology (either hypertrophic or dilated cardiomyopathy). Here we aim to understand the molecular basis of mutational effects in function of sarcomere components. Using structural-function approaches we are characterizing the sarcomere proteins and their associated disease mutations, which will be key step towards developing small molecules for the treatment of cardiomyopathy diseases.

In order to address the molecular changes, we employ cryo-electron microscopy methods to determine high-resolution structures of actin and microtubule filaments bound to proteins that modulate their function in cells. 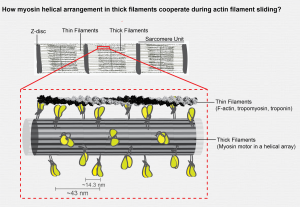 More than 60 years ago Huxley & Niedergerke and Huxley & Hansen independently proposed the sliding filament theory of muscle contraction. Since then a great deal of work has gone into understanding the mechanism of muscle contraction (cross bridge cycle model). Although the in vitro motility assays have illuminated the workings of single myosin motor head, the collective biophysical properties of helical myosin motor array present in myosin thick filaments has not been explored. As a first step towards reconstituting a minimal contractile unit our lab is interested in engineering a myosin assembly that will closely mimic the native myosin filament.

In addition our lab also works on kinesin and dynein molecular motors. 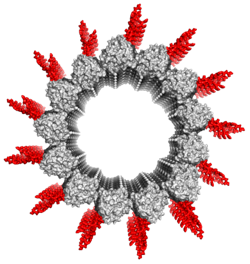 For many years we know that there are multiple tubulin genes available in eukaryotes and their gene products undergo extensive posttranslational modifications (PTMs). The microtubule cytoskeleton field has benefited immensely from tubulin purified from brain sources, however this often lead to oversimplification or ignorance towards the function of tubulin PTMs in cells. During my postdoctoral work at UCSF, we developed a robust system to purify tubulin with a unique PTM or isotype. When tested against kinesin and dynein motors each tubuin modification is sensed by a particular motor for its optimal function (Sirajuddin et al 2014 & McKenney et al 2016). Currently in our lab we are extending this study in cellular systems to study the effects of tubulin PTMs in intracellular cargo transport. We are also interesting in understanding the function of tubuin PTMs in microtubule growth and dynamics.

Microtubule minus end view with C-terminal tails (CTTs) modeled in red. The CTTs are the hotspot for tubulin PTMs and can send transmit cues to regulate motors and microtubule associated proteins. 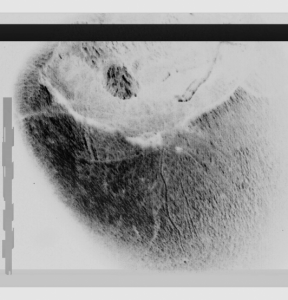 Our research here aims to construct a three dimensional architecture of cardiomyocytes and myofiber arrangement in heart tissue. Understanding the cellular organization of heart has implications in tissue engineering and treatment of cardiomyopathy and other heart related diseases.

Using fish as an example this video explains how pigment dispersion in melanocytes can lead to color change in animals. The dispersion of pigments is an active process mediated by microtubule (tracks), kinesin and dynein motor (transporter) proteins. 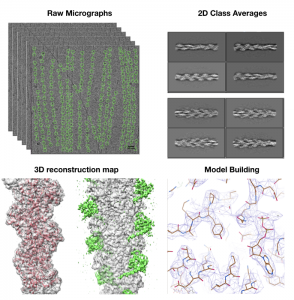 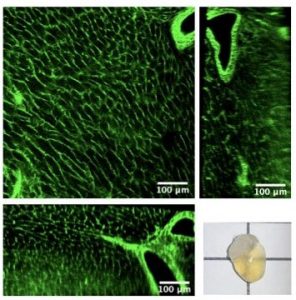